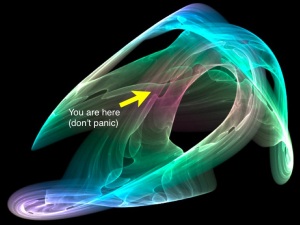 In thinking about today’s post, I stumbled on a familiar question,
"Why does my life feel so chaotic?"  Immediately, I bristled.  Crap!  I don't wanna
write about that…why my existence seems to be in an apparent constant state of
disarray and how I feel powerless in the face of it much of the time.

Before I poo-pooed it, I decided to check in on my good friend,
Google.  Chaos couldn’t only mean “confusion and disorder.”  If that’s the case, why have a “Chaos
Theory” for example?  Just to
explain how screwed we are?  That
seems too cruel.

Wikipedia says chaos theory is used in “studying the behavior of
dynamical systems that are highly sensitive to initial conditions,”
presumably as a predictive tool to aid in identifying how to respond in these
systems with an eye on achieving a more favorable outcome.  Reading this, I felt a little less
bristly.  A little less screwed.

That’s because the notion of my life being merely confused and
disorderly connotes that my actions upon the system of my life have no impact.
No matter what I do, I can't change anything because the continuation the
confusion and disorder is inevitable.  It makes me feel like I have no
power, and that makes me feel like I wanna give up.  It feels passive, and
it feels like victim mentality.

And I don’t wanna be a vicitim.

As I read on about chaos, however, I realized a few things:

1. There is a "method to the madness" of chaos.  Even
though the system might be too complex for my brain to perceive offhand, events
in my life are following a logical pattern.  They’re responses to an “initial condition” that triggered
them, and they’re following a trajectory.
The course of my life intersects with other “conditions” and evolves,
sometimes erratically.  Yet,
outward and immediate appearances aside, it’s not random.

2. It’s “deterministic,”
which means that it’s possible to trace the course back to the “initial
condition” that created the system (i.e., Bill’s life) in the first place.  It is, however, not “predestined,”
which means that the end hasn’t been written yet.  I am not locked into one inevitable outcome, and possibility
and potential are still valid.  I am afforded the luxury of envisioning a desired outcome and, at the very least, influencing the
course to steer toward that outcome.
This is good news, because it means that understanding how I got right
here, right now, is doable.  Even
better, I can use that knowledge to take action and navigate away from endings
I don’t want, and to the ones I do want.

[side note: Conceivably, this also means that applying the writer's tool of starting with your desired ending and then working backward to identify the steps to getting there can be applied to life as it is in movies, ala the LIFESCRIPT training my friends at Sagepresence use to help people live into their best life stories.  I mean, it's a theory, right?  It's there not only to describe past or present states, but also to model potential future states.  In other words, the very existence of chaos theory lends credence to the notion that we can proactively design our future in a manner of our choosing and then chart a course to it.  This is not your father's version of chaos..!]

3. In order to be chaotic, the system being observed has to be
"topologically mixing.”
Through the course of evolving—in fact, in order to evolve—a particular
“region” in the system will overlap with all other regions.  Metaphorically speaking, it means that
transformation REQUIRES taking the good with the bad, the pain with the
pleasure.  Interesting.  Good to know that ahead of time and prepare
for that.  Expect it, knowing that’s not pessimism.  Rather, it confirms the whole “It’s
not easy, but it’s worth it” notion.
Hard and painful things aren’t obstacles; they’re as much part of the
trip as the good stuff.  You can’t
help but get a little from column A and column B (not to mention columns C, D,
E, F, and so on, and even some columns you never even heard of before) along
the way because it IS the way.

Yes, the whole chaos thing also means…damn! This life thing is a freakin'
complex system with a lot of actors and reactors all, erm, acting on each other
at every freakin' point along the way, and it's virtually impossible to keep up
with the whole unfolding, much less control it.

Then again…maybe we're not supposed to control it.  One
application for chaos theory has been to attempt to predict weather patterns to
help commercial aviators navigate more safely to their desired destination.  It ain’t about changing the
weather…it’s about course correction in the face of it.

Maybe by accepting the thing exists, embracing it, even, we can…influence
our course.  Because chaos isn’t
the question.  It’s the answer.  As we understand it better, and as we
understand the systems of our lives better, we can more effectively navigate the
paths we tread through our lives.
Not to master the Universe, because that’s asking too much.  But to live better and be more at ease in the
system, knowing it's okay that the best we might be able to do is to guide
ourselves safely home.  And, if
we’re really on our game, maybe to beat our own butterfly wings here and there
in hopes of shifting the winds in our favor.