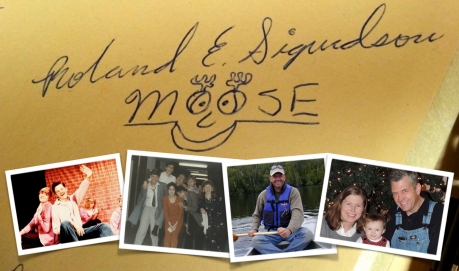 1. Singing “Consider Yourself” as a duo in fifth grade. I had no idea who Roland Sigurdson was until Ms. King said I should do a duet with him at some districtwide talenty-thingy. I played Artful Dodger to his Oliver. Of course, it foreshadowed our honest-to-goodness “Oliver!” experience a couple years later. Most important, though, it was the time I met this farm kid from North Branch. He was goofy and funny and liked all the stuff my other pals (Michael Popham and DL Anderson) liked. He was our kinda cool. All the rest of us guys knew that once 2013 came along, and the world was destroyed, we were gonna beat it outta here…headed “Beyond the Stars” on the Centauri 3. We never, ever considered adding another guy to the crew…until we met that kid, Roland Sigurdson. There was never a question, and he hopped onboard with gusto.

2. Hanging out on the couches in the theatre workroom during our “study hall” (Thanks, Hanover [aka Deanna Lindenfelser]) and lunch. All of us guys would sit around and give each other endless shit. Insults were our second language…it was (and still is) the official language of our brotherhood. Even then, I knew whiling away the hours razzing Roland about being a “social leper” and thinking girls were “sissy boys” was about the most fun I’d ever have in my life. And that even if time and space separated us, these guys would always be my family.

3. Singing “Elivra” at the CHS talent show. Shit…we wanted to have nothing to do with that, but these other guys (I can’t even remember their names anymore) really wanted to do it, and they didn’t have enough people. And Mrs. McDonald was very convincing (read: guilt trip). Our one stipulation: Roland and I demanded that we got to wear bandanas over our faces…like outlaws. I can’t even begin to quantify the amount of junk the other kids threw at us on the stage, nor can I count how many insults were flung at us. But I do know that we had waaaaay more fun than we would admit to anyone else.

4. When all us guys resumed playing Traveller…this time “with beer!” We were all in our late 30s by then, and I was thinking about how much I missed my brothers. So we stocked up on supplies (i.e., steaks, chips, coffee, cigars, and lots and lots of beer) and rendezvoused at Roland’s posh North Branch lair. It was the night of galactic debauchery and “tri-breasted” women (you had to be there…or not). And the next morning, which was even better, as we all sat around and read the Minneapolis Tribune papers Roland had salvaged from his attic. They were the insulation for his ancient abode. We all parked on the floor of his living room, drinking coffee David had conjured from his mad scientist vacuum coffee contraption. The four of us shared articles we’d read, time traveling together through the 1930s. It was one of those transcendent conversations, where you analyze and solve all the world’s problems. We were a veritable think thank that morning. I remember what a perfect moment it was…how much I didn’t want it to end. How much I respected these three guys. How smart and cool they were, and how much I was honored to be part of this little band.

5. Roland, Mike and me…and the mystery of MOOLATTE! One August weekend, about 10 years ago, David couldn’t make it to one of our weekend retreats at Roland’s farm. It was just the three of us. For some reason, we ran to Walgreens in town and bought pipe tobacco and corncob pipes and decided to smoke ’em all night long. Oh yeah, and then there was the matter of beer. All night, the three of us played out this movie we were making up on the fly: MOOLATTE! Most of the scenes existed as an excuse to yell out the line, “WHAT DO YOU KNOW ABOUT MOOLATTE!!!” This cracked us up to no end. There is photographic evidence of this, in the form of grainy, black and white “movie stills” I shot with my Nokia. I will spare you the actual visuals. I can’t remember much more about the movie story, except someone got impaled on a pitchfork as they made love with Charlize Theron. It was a classy movie. I do remember, though, that it was another of those moments when I thanked God for these guys. For their creativity and intellect. For their ability to play and be silly. In your 30s and 40s, that is a balm on your life. It sure was for me.

6. Another Traveller weekend…though I think ZOMBIES!!! had supplanted Traveller by then. We were at Mike’s place this time, and Roland needed to bug out early the next day. All night he wouldn’t tell us why, no matter how much we razzed him. It was maddening. He wouldn’t crack. The next morning, he was acting “weird.” It suddenly hit us. “Moose…do you have a, a date?” His blushing said it all. He was going on a ski date with this gal he’d met through his work with the DNR. Her name was Stacey. We hadn’t met her yet, obviously, but we already knew her. She was the girl Roland was gonna marry. It was right there on his face: contentment, happiness. Of course, we weren’t gonna let him get off that easy, so all through breakfast we made fun of him about it. (“I thought you still thought girls were sissy boys?!?”) That was our way. But after he left, a quiet settled over the rest of us. I remember smiling, truly glad for my friend.

I don’t know how much more I can say.

Over the past 24 hours I’ve thought a lot about the movie, STAND BY ME. About how much that movie is about my friends and me. Those kids were us. Roland would hate the idea that the rest of us thought of him as Vern, but Vern turned out to be the coolest of ’em all. And he grew up to be Jerry McConnell…so get over it, Moose!

As I think about my friend, Roland, today, I keep coming back to the scene where Gordy sees the deer while everyone else is sleeping. “The freight woke up the other guys and it was on the tip of my tongue to tell them about the deer,” Older Gordy says. “But I didn’t. That was the one thing I kept to myself. I’ve never spoken or written about it until just now.” As I trace the path of my journey with Roland Sigurdson, there is so much more that I could say…but I kinda just want to sit here quietly and be with the memories. Because they are precious and fleeting. And they are all I or any of us have now.

And still, he was so much more than that, even. Our friend Mike wrote, “He was the best sort of friend you could ever hope to have, one of those rare people of truly sterling integrity. He really did leave the world a better place than he found it.” I can’t say it any better.

I can tell you I miss my friend. I feel for his beautiful wife and daughter, and his family and other friends, as they miss him so terribly, too. It’s strange. It’s not like death hasn’t touched my life before in profound ways, but today I feel a mourning I haven’t experienced before. A Moose-shaped hollowness in my gut.

Godspeed, Moose, as you blaze the trail “Beyond the Stars.” I love you.