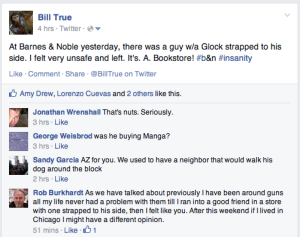 I have been scared to look at both sites all morning for fear of the reposes I might get for posting it.  Fortunately, the comments have all been very supportive.

So in response to Rob’s comment, I said what you see below.  I’ve wanted to say it for a long time.  It is my opinion, based on my understanding of our Constitutional rights and responsibilities.  It is also what my heart tells me.  Here goes:

I’m with you, Rob. I am definitely NOT anti-gun. I went through gun safety as a kid, I’ve hunted and think it’s okay if people own guns. That’s not the issue. The issue is one of public safety. I am not ashamed to say that it really scared me. I have no idea how stable this guy is, and he’s sitting there with a big frown on his face and a Glock on his belt. AND THERE WERE KIDS IN THE STORE!

Not sure what happened in Chicago this past weekend. Did I miss something?

Anyway…there has to be some way to bring sanity to our collective take on guns and their presence in our society. The 2nd Amendment, though it uses the word “bear” with respect to “arms”, doesn’t explicitly state or even imply that citizens have a “right” or should feel free to carry guns anywhere and everywhere they want. The amendment qualifies the usage of this “bearing” of “arms”, anyway, to ensure the republic (not an individual, not a fraction of the citizenry, not a group that disagrees with the democratically elected officials in office) has a well-armed militia as “being necessary to the security of a free state.” One can pick that apart all one wants, but there is no implication there that individual citizens–in order to participate in a pro-state (meaning in defense of the republic as our democratically elected officials have designed, organized and manage it) militia—need to HAVE THEIR GUNS WITH THEM AT ALL TIMES! It should be enough that people can own guns, which they have a right to do in this country. The right to bear arms is NOT infringed upon. And the Constitution, itself, DOES imply that the only time citizens should “bear” these “arms” is, well, when the government tells them to.

The act of flaunting guns, however, is not a right, nor is it protected by our Constitution, in my opinion.

There was no threat to our state at the bookstore, nor did this man’s country (as represented by our elected officials) call upon him to bring his gun to bear for the protection of our nation. As such, the gun should have been left at home where it belongs.

Self protection is not a 2nd Amendment right. It is, however, every citizen’s Constitutional responsibility to “insure domestic Tranquility” and “promote the general Welfare.” This being true, it is most UN-American, in my view, to willfully and wantonly disregard and degrade other citizens’ sense of safely and security in favor of some selfish notion that “I want to carry a gun, so I should be able to.” Taking care of and looking our for each other–above all–are the premises upon which our republic was built. THAT is American.

Leave the guns at home.

One thought on “Leave the guns at home”