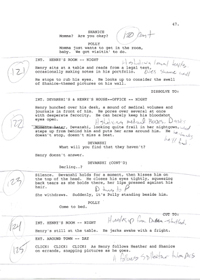 Innocent-looking enough page with some typing and scribble on it, right?

If that’s what you think, you’d be wrong.  This page, and 105 others very similar to it, have the power to take control of a human life.  To keep it captive for weeks–even months–at a time.  Not just the body, but the mind.  The soul, even.  And they are ruthless, unforgiving captors.

For the past four weeks, I have been trying to complete a rewrite of my script, INCARNATION.  There at least two production companies (one has read a draft, the other hasn’t) who are very, very interested in it, and I am also counting on it to absolutely seal the deal on this very cool manager I have been sort of working with of late.  So…no pressure.

It’s nothing fundamental, like the premise isn’t interesting or the plot is lacking or the characters aren’t real and engaging.  No, everyone really likes all of that.  In fact, the universal response is that this is a great, solid script that is beautifully written (gosh…thanks, folks).

The problem is that I made a decision for one of the main characters at the outset of writing the thing, and that decision is proving to be potentially fatal.  It has everyone who reads the thing saying, "In the end, I loved it.  It made perfect sense, and I was really moved and entertained.  But in the beginning, I wasn’t so sure about where you were going with that Henry character.  I was afraid to like him.  I was afraid that I was going to be sorely disappointed and hurt later if I put my trust in him."

I get it.  Oddly enough, it was that specific reaction that I was looking for when I sat down to write the Henry character.  My assertion was that it’s important for him to be something of a cypher and for us to question his motives.  It heightened the impact of the eventual reveal, I thought.

And all that is true.  People get that.  But it still gets in the way of the experience of the read.

And it’s getting in the way of people committing to the script.

So I have to fix that.  Problem is, something that integral to the structure of the story has implications throughout the entire script.  It has tendrils that burrow into several scenes, which must be ferreted out and contended with.

My solution was to go back to Screenwriting 101.  Break the script down beat by beat, which is represented by the scribble on the page at the top of this post.  The only way that I can make certain that the issue is adequately addressed and resolved is to tear the thing down like an engine.  Line up the parts on the floor; take a look at each and every one.  Identify which ones require polishing, and which ones require replacing.  Then put the thing back together.

After I am done, the thing’s gonna look kind of different, but my hope is that this baby hums like it ain’t never hummed before.

But right now, all the parts are still scattered across the floor.  I am feeling a little overwhelmed and a lot under pressure (mostly of the temporal variety).  I am somewhat behind the 8-ball in getting the new version to the people who want to read it, and I have to get it out the door sometime next week.  At the latest.  And so the rest of my life is, at the moment, at a virtual stand still until I can find the best and most creative way to put all these pieces back together.

We’ll see what happens.  For now, I feel most bad for Robbye, whom I knows misses her husband.

Don’t worry, Baby.  Good news is the work is paying off.  I had a burst of inspiration yesterday, and I think I know how do this now.  Keep a beer handy; I’ll be emerging from the garage soon.