Tonight, a good man fights for his life.

This from my friend, John Soberg’s, CaringBridge site: 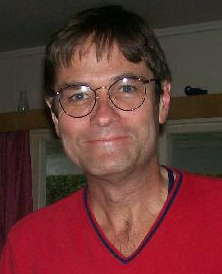 “It is 5:00 pm our time and John was admitted this afternoon at Abbott. His blood test show that his liver and kidneys are shutting down and this could go either way. They have suggested that we call our family together and so, my Caring Bridge family, I am calling you together as well to pray for John. They are giving him IV fluids in hopes that this will help jump-start his functions but they are not very hopeful. Please join with us in prayer. Even if it comes at 11:59:59, it is STILL a miracle!”

I met John the summer before last, when a good friend of my partner in crime, Dean Hyers, set up lunch with John and his partner in crime, Drew. John, an entrepreneur and former lobbyist (actually, John’s resumé reads something like a “what haven’t you done?” list), had made quite a splash in the Minnesota film community by effectively leading the charge to reinstate the Snowbate program that ex-Governor Jesse “The Baby” Ventura (Good riddance! Don’t let the door hit your @ss on the way out!) nixed during his, ahem, “administration”. As a result of John’s good (and pro-bono) efforts, life was breathed into the Minnesota film industry, which most everyone had given up for dead. We were meeting with him, though, because he was exploring taking his interest to the next level. He wanted to get involved with some of the industry “movers and shakers” brave enough to remain living in the area and see what collective mischief we might make together.

We worked with John and Drew throughout last year on evaluating/developing a couple of projects. Neither of those panned out (as is they way of things in this business), but we knew something would hit. So we kept convening what we affectionately came to call the Co4 (Council of Four), a coffee klatch of sorts that was technically dedicated to landing on the project that we would eventually work on together, but in practice more aligned with “brainular nutrification”, as John termed it (read: contemplating the Universe).

The long and short of it is that throughout the process moving from sitting on opposite sides of the table in negotiations with John, to joining forces, to just gabbing, my head grew to understand something my heart already knew. I loved this guy. He was an old friend in a new acquaintance’s guise. He was a brother of sorts. And throughout every interaction with him, I marveled at his integrity and intelligence. And his amazing ability to breakdown metaphysical contructs and map the systematic processes/connections associated with them.

I remember one day when he sat with me at Nina’s, one of our favorite spots, and graphed out why Drew’s, Dean’s, John’s and my personalities/strengths created the dynamic synergy we were experiencing. He started talking about it, and I’m thinking bullshit. But by the time he got done drawing the thing out, I was a believer.

He is a great mind. And an even greater heart. And an ever greater man.

I was honored this past Saturday, when I drove out to his home to deliver dinner to his family. I’d expected to simply drop off the meal and head out. Last I’d heard, John was in the hospital. But I get to the door, and his wife answers. And the next thing I know, she’s saying, “Let me tell John you’re here.”

I got to spend an hour visiting with him. In true John fashion, he waxed on for nearly the entire time about the experience of standing at the precipice. Of looking at the other side and accepting, but of being surprised yet that living here still felt like a viable option. So why not continue to work toward healing? Indeed. He described the quality of the experience as the poet scientist he is. I walked away from the experience wiser–changed yet again.

I don’t know what God’s got in the immediate cards for John. Whether he’ll continue on here in this life or move on to shake things up in the next. But I do know that, in John’s own words, life here is still a “viable option”. And his family–all of us–could really use him here for a good while longer.

This is a weird week for guys like me. But John’s struggle–the most real of reals–puts it all into perspective.

He could use all of the prayers he can get right now. Let’s eke out one more miracle, shall we?